Google Shopping is splitting off from the group and will in future also be offering advertising spaces. Is that a positive or a negative development? An analysis by t3n editor Jochen G. Fuchs.

After a long series of proposals to the EU Competition Commission, Google has initially averted further measures by the Commission with the last proposal. While Google initially suggested that the advertising field placed directly under the search mask should only be opened for third-party suppliers in the auction process – the new proposal apparently met the taste of the Commission.

Google Shopping will be spun off as a separate company, and will offer around the same ad spaces as everyone else. Under the condition that the company finances itself from its own advertising income and is only allowed to bid for advertisements if the product placement is still profitable.

This is to prevent the effect that is to be achieved by the outsourcing of the company from being thwarted by unprofitable and excessive bids in Google auctions. Otherwise the group could push up the bids of the competitors or simply restore the old status quo by constantly outbidding the competitors in the price war for ad space.

How the new advertising field for product search engines should work

In principle, the previous advertising field specifically for products remains, which is displayed either directly below the search mask or on the right-hand side next to the organic search results. In the future, the ten ad spaces there will no longer be exclusively occupied by Google, but can theoretically be booked by any company. Provided that the company is the highest bidder.

The potential disadvantages of the new advertising field

In principle, many price search engines would have wished that the organic search results, which also contain their own offers, were in some way equivalent to the Google Shopping ads. The EU Commission does not go that far, but Competition Commissioner Margrethe Verstagen told Bloomberg that the Commission will keep an eye on the development of the new Google advertising fields and the development of Google Shopping. “The compromise will be tested on the market, should complainants continue to be unhappy, and the new regulation does not work, then we will start an investigation,” said Verhagen to the US news channel.

Some retailers and industry media, such as the Google Watchblog or the online retailer news from the Händlerbund, fear that this development will develop to the disadvantage of the market and to the disadvantage of the retailers. The Google Watchblog writes that Google is now in competition with online shops, financially strong companies could simply buy all ads and, above all, the user would lose an overview and variety. Even if the critics consider the possibility that all ads will simply be bought up as unlikely, the development is rated rather negatively. In the end, so fear the critical voices, the new advertising field only flushes more money into Google’s coffers.

Advantage or disadvantage for dealers and the market?

It is understandable that price search engines would like to see organic search results on an equal footing and would be detrimental to the market because of the poor feasibility. How so? Google would never do without prominently placing its product ads.

If the EU Commission had asked for the organic search results to be put on an equal footing, a soft regulation would have been implemented that would have required constant individual checks. For example, it is difficult to answer the question of whether this or that product ranks worse because Google inconspicuously pushes a bestseller from its own offers. The Google search algorithm is a black box. As has already been done, the US company could use ranking factors as an argument. The search giant’s obfuscation tactics would be varied and difficult to document.

The auction process, on the other hand, can be documented by means of a simple, imputed check. The commissions from Google Shopping are known, so it is possible to quickly calculate whether a Google auction bid was profitable or not using standard market comparison data. Price search engines that are permanently losing to Google could document this. 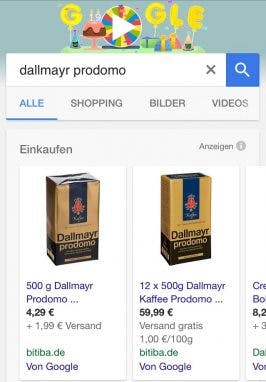 Traders have so far had no choice. If you want to generate sales at Google, you have to use Google Shopping and Adwords campaigns in addition to organic traffic. So far, your own offers have always had to assert themselves against the competitor Google and its advertising field – or just be placed on Google Shopping.

The retailer now has less competition from Google because his own offers or those of the price search engine of his choice appear for the first time alongside the Google shopping offers. Yes, so far the Google Shopping advertising field has always diverted attention from the organic search results, but that would not have changed because Google would definitely place ads there. Then just Adwords ads and no Google Shopping ads.

The market and the Google Shopping competitors benefit from the fact that the prominent product placements under the search mask are now at least available to everyone.

It’s surely nicer to wish back to the golden days when organic, free traffic made up the lion’s share of sales. The fact that it is no longer the case today is not just down to Google. It’s because of changed user behavior, Amazon as the number one product search engine and the fact that the point of sale is now shifting to all sorts of channels: especially social media channels, but also messengers and, in the future, voice assistants.

In some segments, brick-and-mortar retail is still more popular than online shopping

View all posts by Jonathan Bond →

Thank you for subscribing.

we respect your privacy and take protecting it seriously